A tool that generate code for Swift projects, designed to improve the maintainability of UIColors

A tool that generate code for Swift projects, designed to improve the maintainability of UIColors. SwiftColorGen reads all storyboard files to find common sRGB colors, it creates them in a .xcassets folder and refer them in the storyboard. Then, it creates an UIColor extension allowing to access the same colors programatically. (It creates a name for the color based on the color proximity with the WebColors names). The main idea of the lib is to create a tool that allows the developer to truly reuse colors across storyboards and code.

Based on the "Color" category.
Alternatively, view SwiftColorGen alternatives based on common mentions on social networks and blogs.

Do you think we are missing an alternative of SwiftColorGen or a related project?

A tool that generate code for Swift projects, designed to improve the maintainability of UIColors.

Please notice, this tool still under development. It's on a validation phase, where I'll test it integrated with existing iOS projects to see how useful it is. Feedbacks are appreciated. Also notice this tool not only generates new code, but also updates existing storyboard files, so keep your code under versioning control to avoid any data loss!

Manage colors in iOS projects can be challenging. It would be useful to reuse colors in different places in the storyboard and also access them programmatically. In code, you can group the colors in one place, but it's common to have the same color redefined in many places in the storyboards. When you need to update a color, you need to remember to replace them everywhere and because of that, it becomes hard to maintain.

Since Xcode 9, we are able to define a color asset in the Assets catalog, allowing us to reuse a color inside the storyboards and access them programmatically. Though, this still isn't perfect:

SwiftColorGen reads all storyboard files to find common colors, it creates them in a .xcassets folder (without any duplications) and refer them back in the storyboard. Then, it creates an UIColor extension allowing to access the same colors programmatically. It automatically puts a name to the colors found. The name will be the closest webcolor name, measuring the color distance between them. But, the user still can rename the colors and it will keep the storyboards updated.

The rules for naming the colors dinamically:

SwiftColorGen is written in Swift and requires Swift to run. These are the dependencies:

That's the result of the code generation:

Collecting the colors on Storyboard and generating the Assets

You will probably want to rename the color and run the tool again, but you can just create another extension on another file referring the generated code:

Here a complete video with the tool in action: 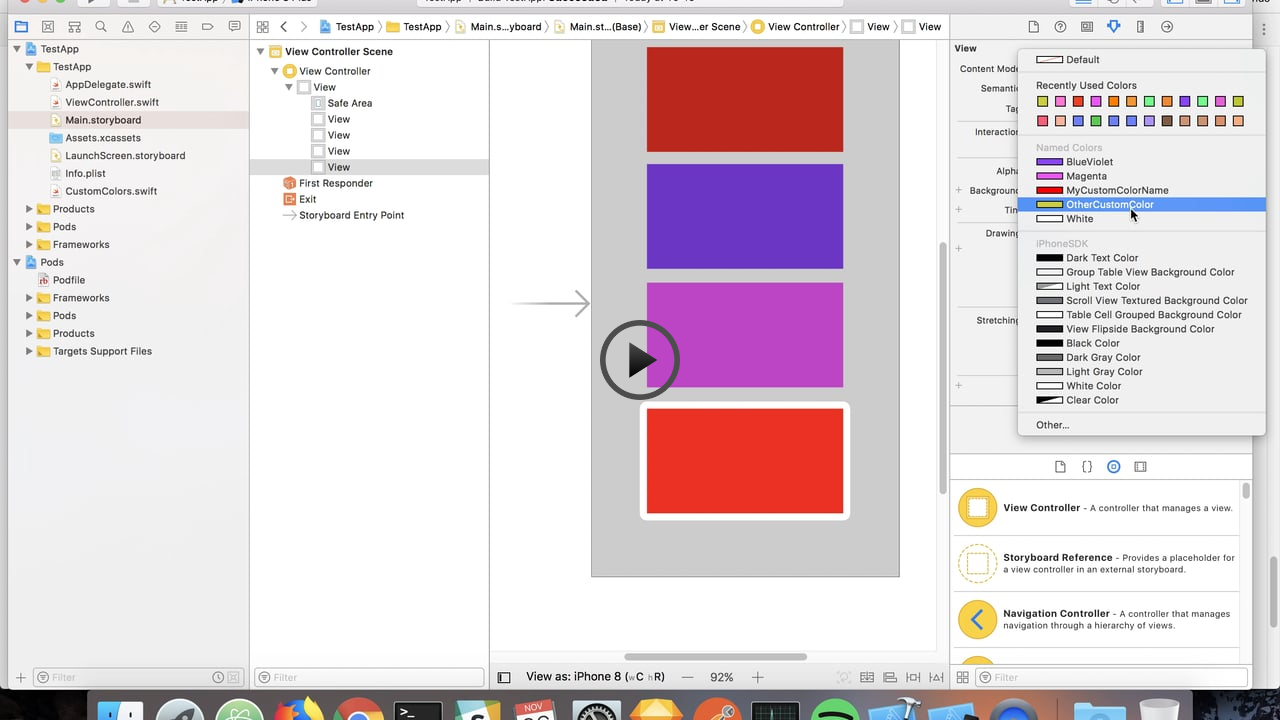 Then run passing the appropriate parameters (if you prefer, you can also use the binary generated inside the .build folder):

Notice that OS X 10.12 is required to run, because of a dependency from a NSColor method (used to convert between different color spaces)

You can install the tool using CocoaPods and then add a Build Phase step, that runs SwiftColorGen every time the project is built.

CocoaPods is a dependency manager for Cocoa projects.

This project still on a initial stage of development. Feel free to contribute by testing it and reporting bugs. If you want to help developing it, checkout the issues section. If you fixed some issue or made some enhancement, open a pull request.

SwiftColorGen is available under the MIT license. See the LICENSE file for more info.


*Note that all licence references and agreements mentioned in the SwiftColorGen README section above are relevant to that project's source code only.