Based on the "Charts" category.
Alternatively, view FlowerChart alternatives based on common mentions on social networks and blogs.

Do you think we are missing an alternative of FlowerChart or a related project?

Flower-shaped chart written in Swift, this repo is a sample project you can build directly on your iPhone. The charts generated are fully vector and scale without any rasterization and annying pixels. Part of the Awesome iOS curated list.

The chart itself looks as follows: 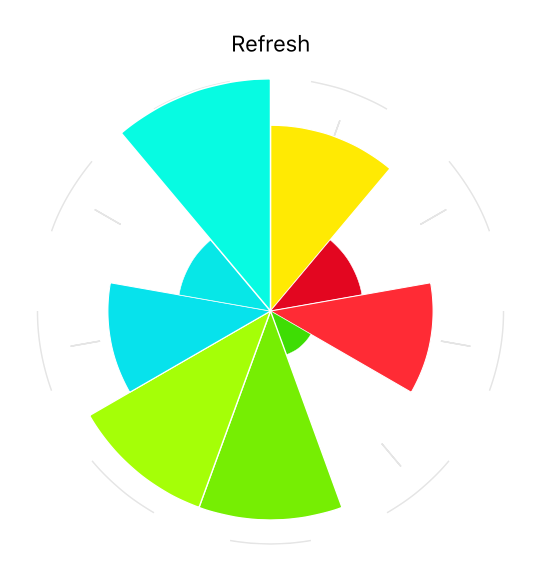 You can set arbitrary number of "petals" for the flower while creating an instance of the FlowerChart class, draw the flower itself with drawFlower method (providing an array of UIColors for petals to look the way you like) and set sizes to them using the setPetalSizes method. Size for each petal has to be a Double 0.0 ..< 10.0 (no failsafe check in place yet, to be added in future releases). In the sample project there is a Refresh button that generates random sizes for all the petals to show how the chart might look like.

To use flower charts in your own project - just add the FlowerChart.swift file to it. You'd need a pre-set UIView which will serve as a canvas for the chart to appear on (just create a basic outlet for it), it's auto-fitted inside the view so no restrictions on its layout.

In the ViewController you need the following properties:

Ensure sizesArray and colorsArray contain necessary amount of elements to draw the number of petals you need. Create an instance of FlowerChart class on viewDidAppear and set it up in just 4 lines of code:

We would love for you to contribute to Flowerchart, check the LICENSE file for more info.

Distributed under the MIT license. See LICENSE for more information.

Good luck and feel free to report any issues, I'll fix them shortly!


*Note that all licence references and agreements mentioned in the FlowerChart README section above are relevant to that project's source code only.