📡 Native App over HTTP, on iOS

Based on the "Reactive Programming" category.
Alternatively, view JASONETTE-iOS alternatives based on common mentions on social networks and blogs.

Run Linux Software Faster and Safer than Linux with Unikernels

Do you think we are missing an alternative of JASONETTE-iOS or a related project?

Create your own native iOS app with nothing but JSON. Then send it over the Internet.

★ Jasonette fetches this JSON markup from a server: 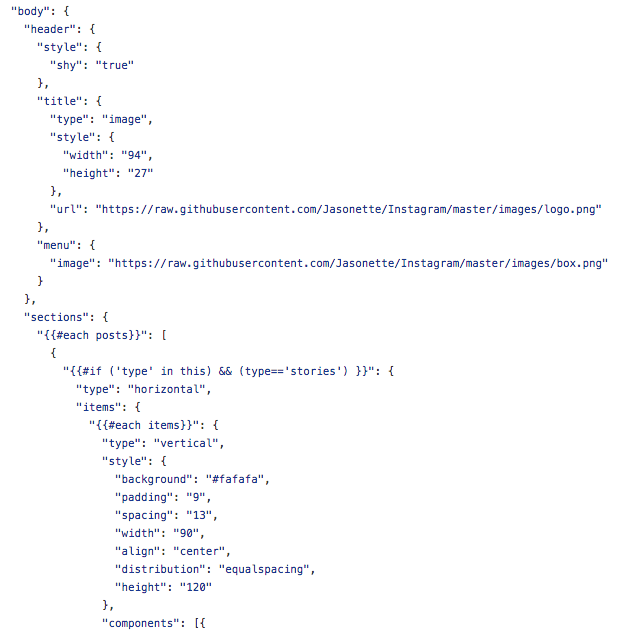 ★ And self-constructs into the following native app, in realtime:

Visit the website to get started, or visit the docs to learn more about how to use Jasonette.

Try playing these on Jasonette and watch them turn into native apps in front of your eyes!

1. One JSON to rule them all

Jasonette simplifies the entire app building process down to nothing more than:

This is possible because Jasonette came up with a way to fit an entire app worth of logic into a single declarative JSON that just works™. This JSON grammar is used to express every aspect of your app, such as:

Until now, the only thing JSON could send over the Internet was raw data. Normally apps would fetch remote data from the server for a connected experience, but the actual app logic would be hard-coded on the client side. This makes it hard to update and extend apps.

But what happens when you can express an entire app logic as JSON?

Then apps can be stored, processed, shared, and sent over the Internet just like any other JSON. Watch below where we update the JSON on a JSON pastebin server, and the app changes immediately to reflect the new markup:

3. Designed to be extended or integrated

Currently Jasonette covers all the essential native APIs and components, which means you can build pretty much any app you can imagine. But Jasonette is very flexible.

If you don't see a feature you want, you can simply extend Jasonette. If it's useful for the general public, we can even merge it into the core.

You can even integrate Jasonette with your existing iOS project if you want. This way you can use Jasonette for just a small part of your app without having to completely switch to a new way of programming.

Have a bug or a feature request regarding the Jasonette code itself? Please open a new issue.

Follow or join these channels for questions and support, and to keep updated on latest releases and announcements.

There are many ways to contribute. But first, please [read the contributing guideline](CONTRIBUTING.md)

Jasonette is released under the MIT License.


*Note that all licence references and agreements mentioned in the JASONETTE-iOS README section above are relevant to that project's source code only.